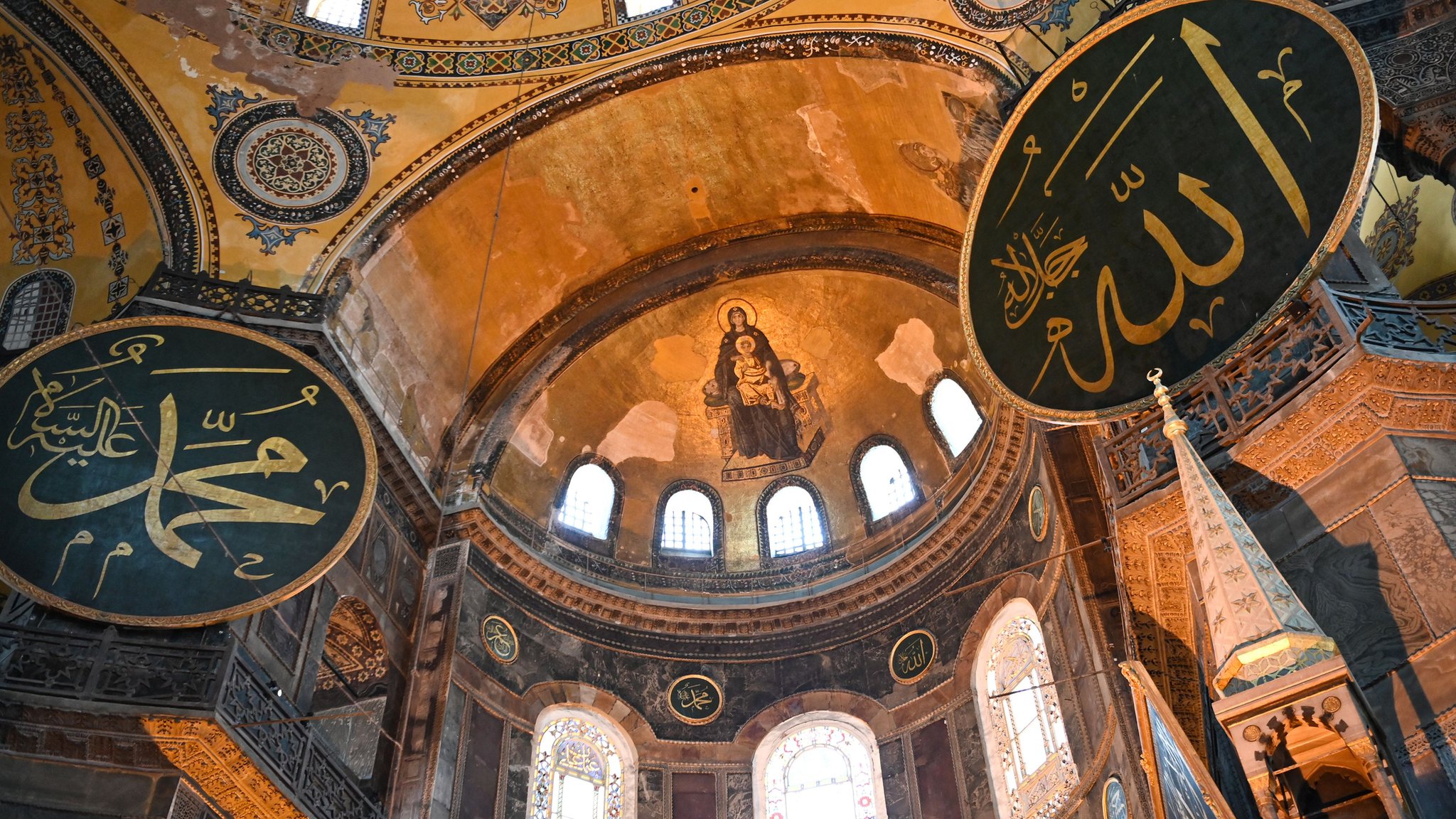 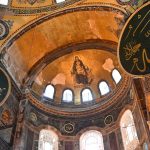 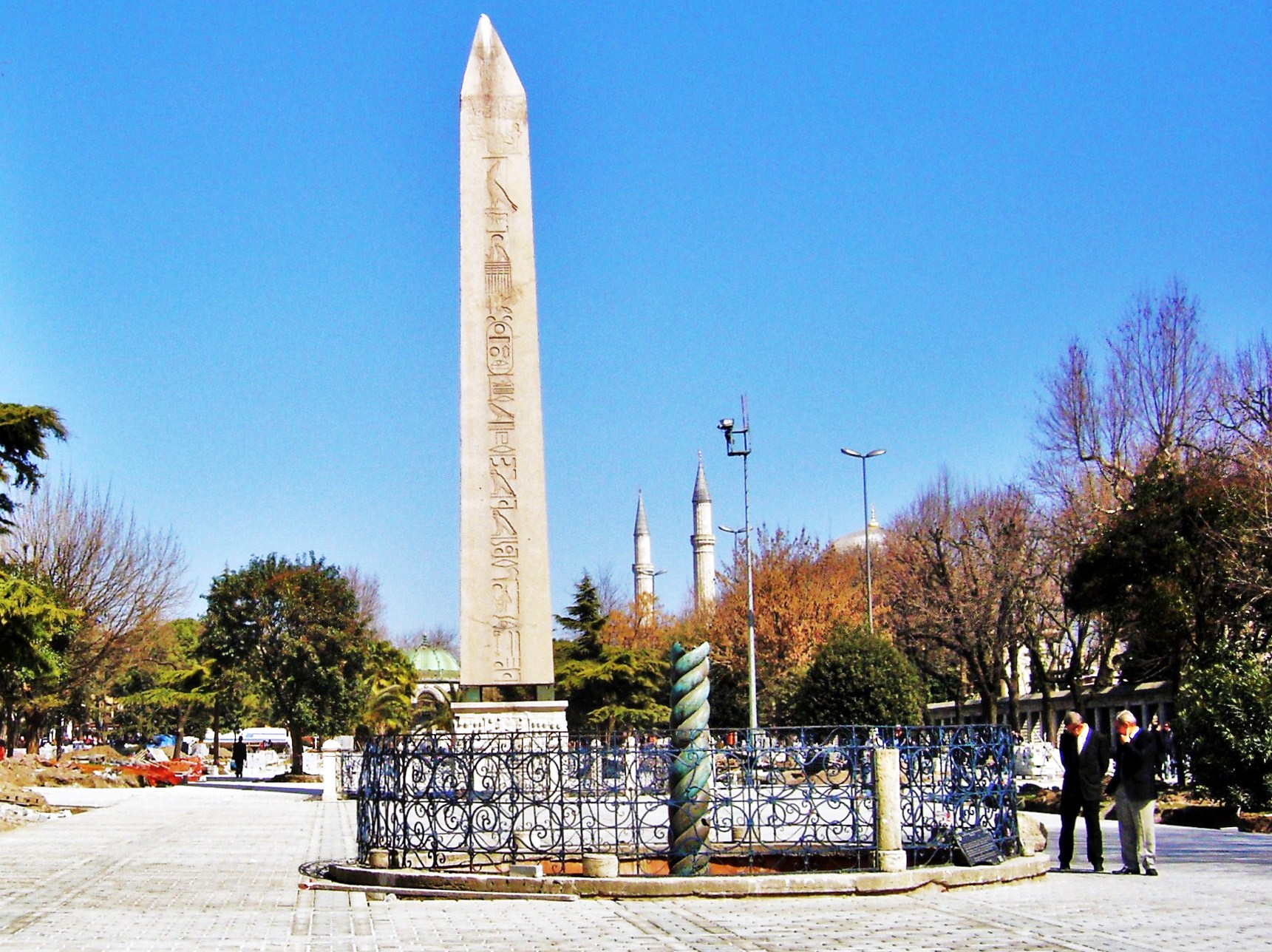 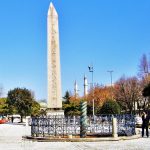 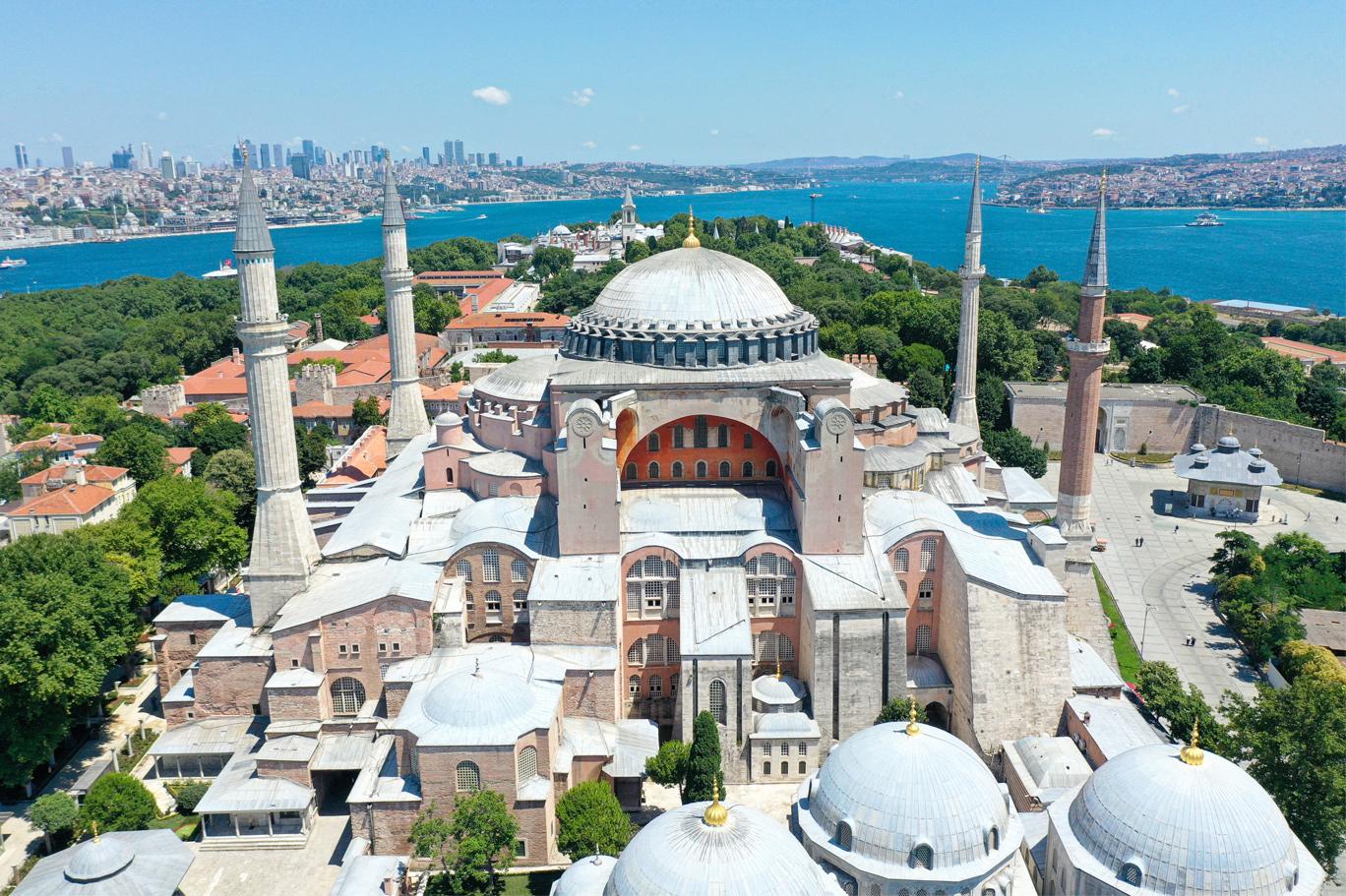 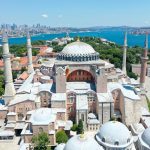 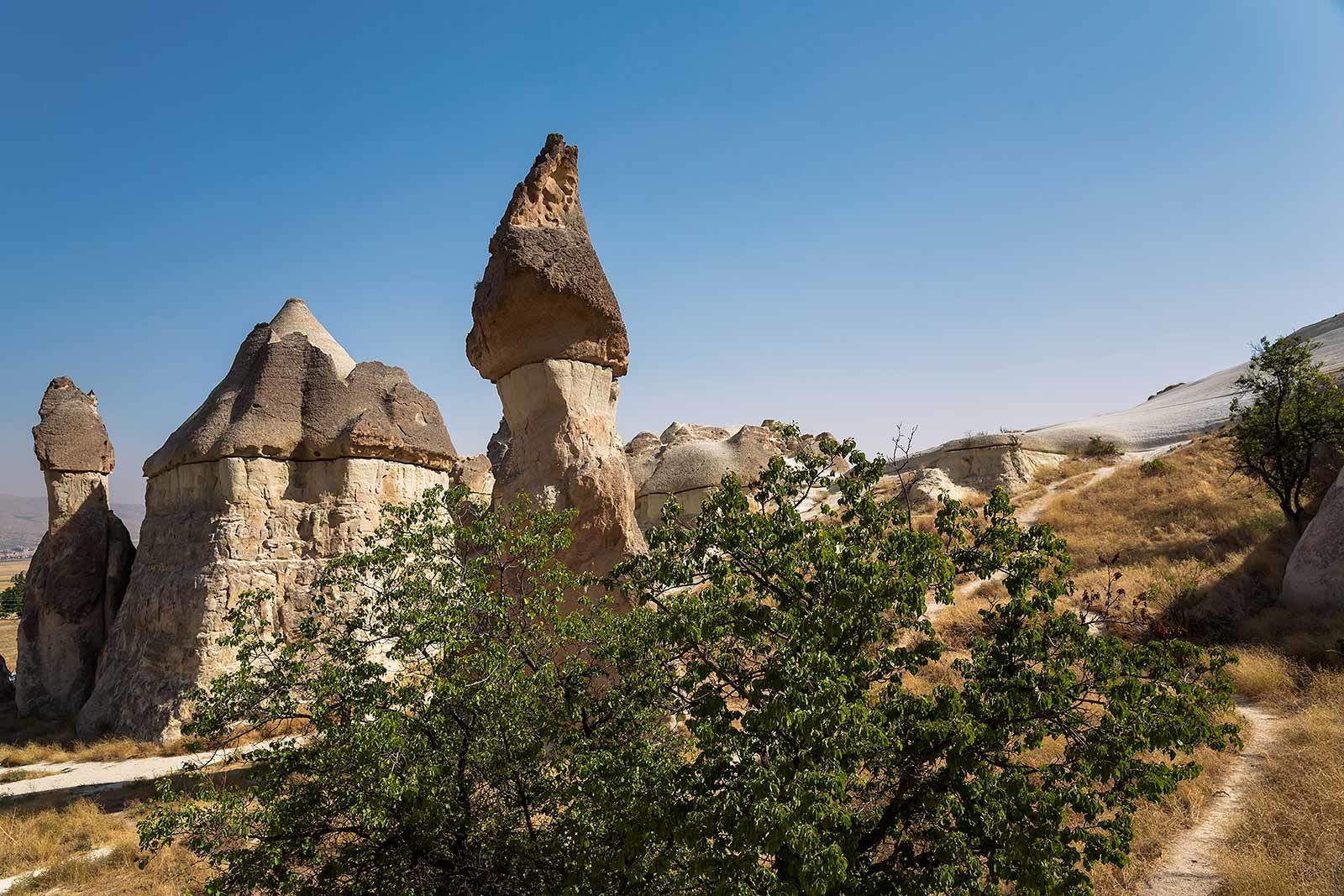 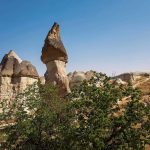 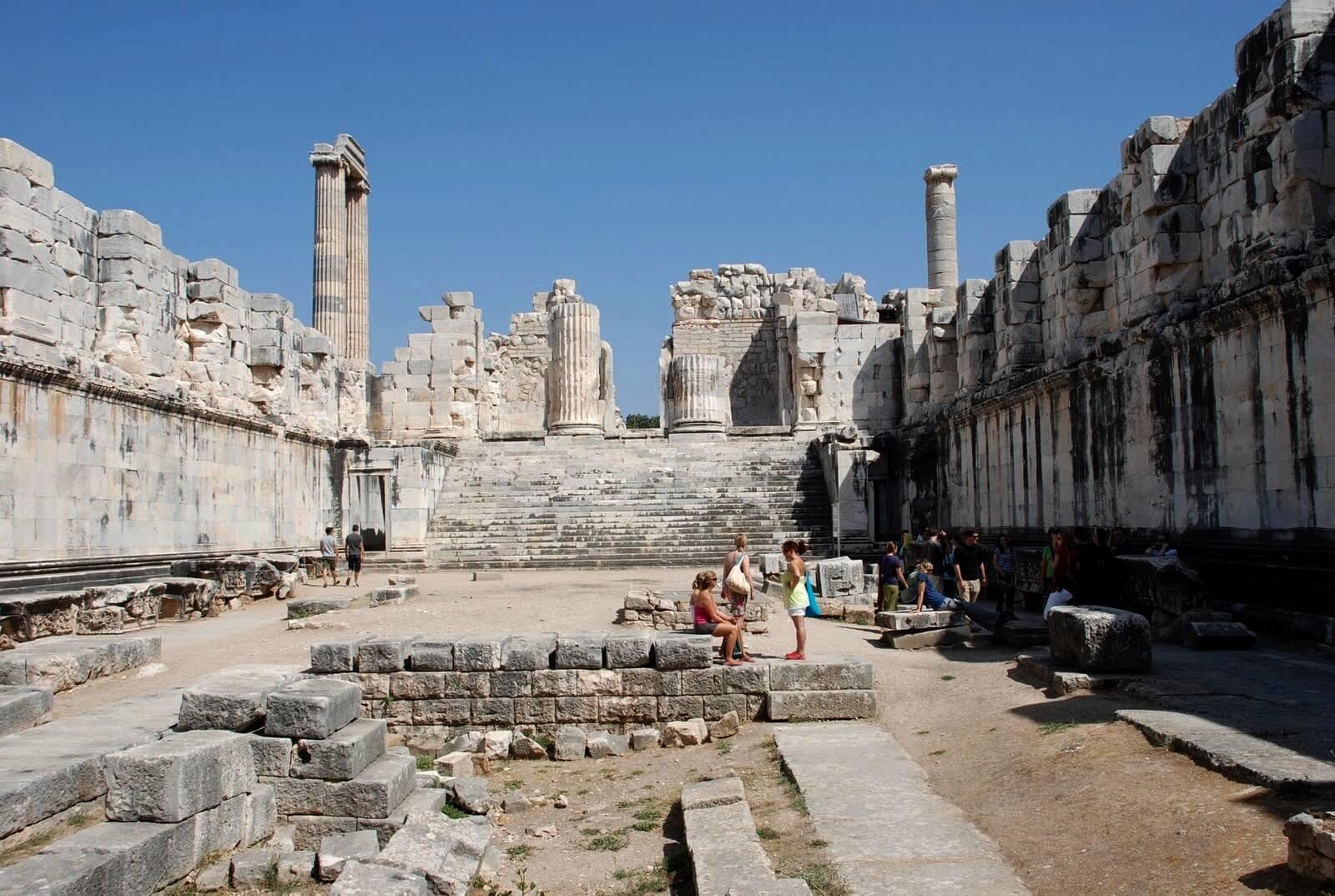 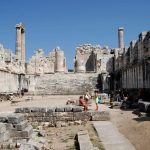 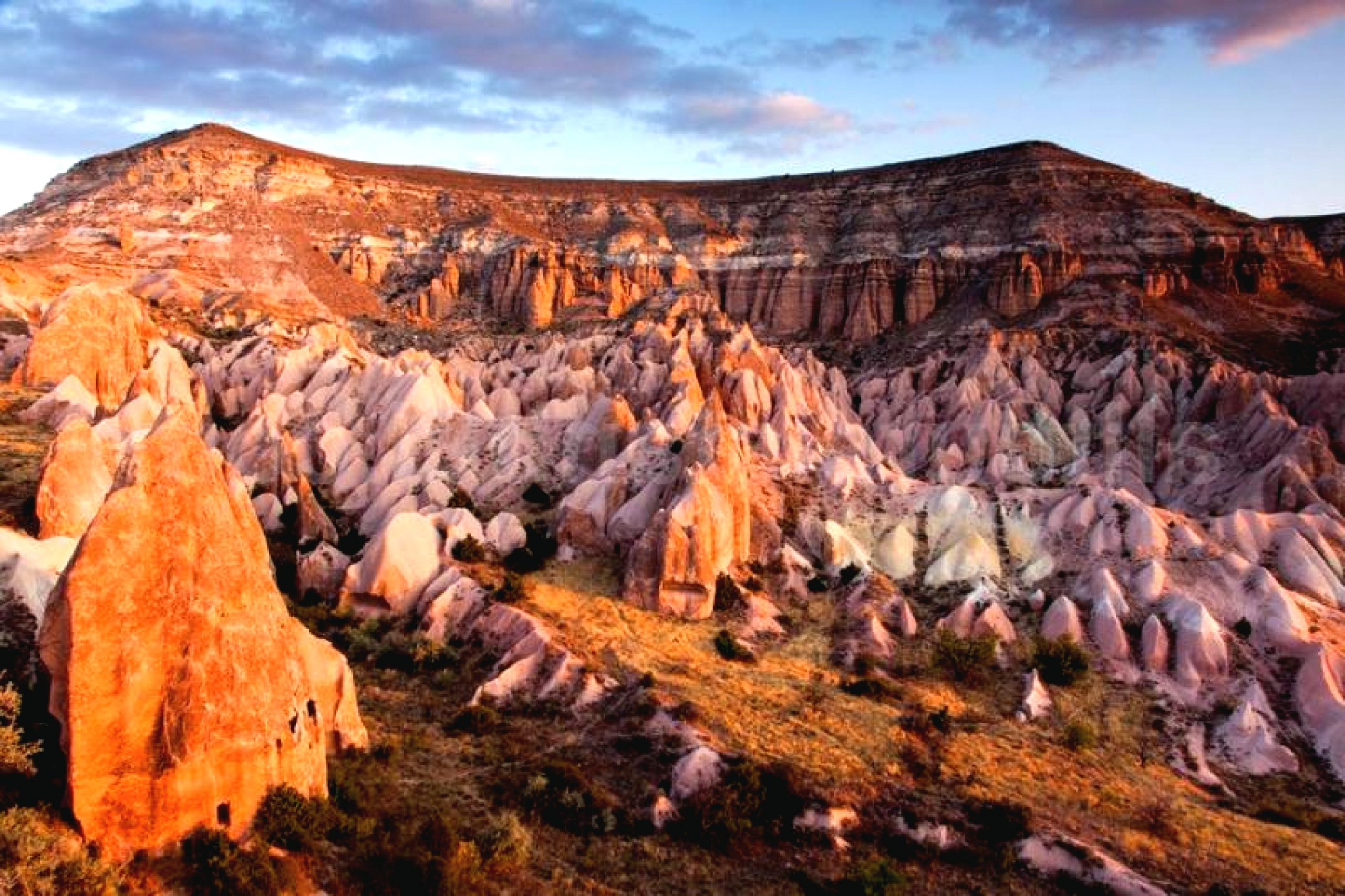 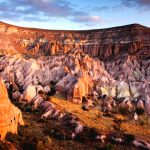 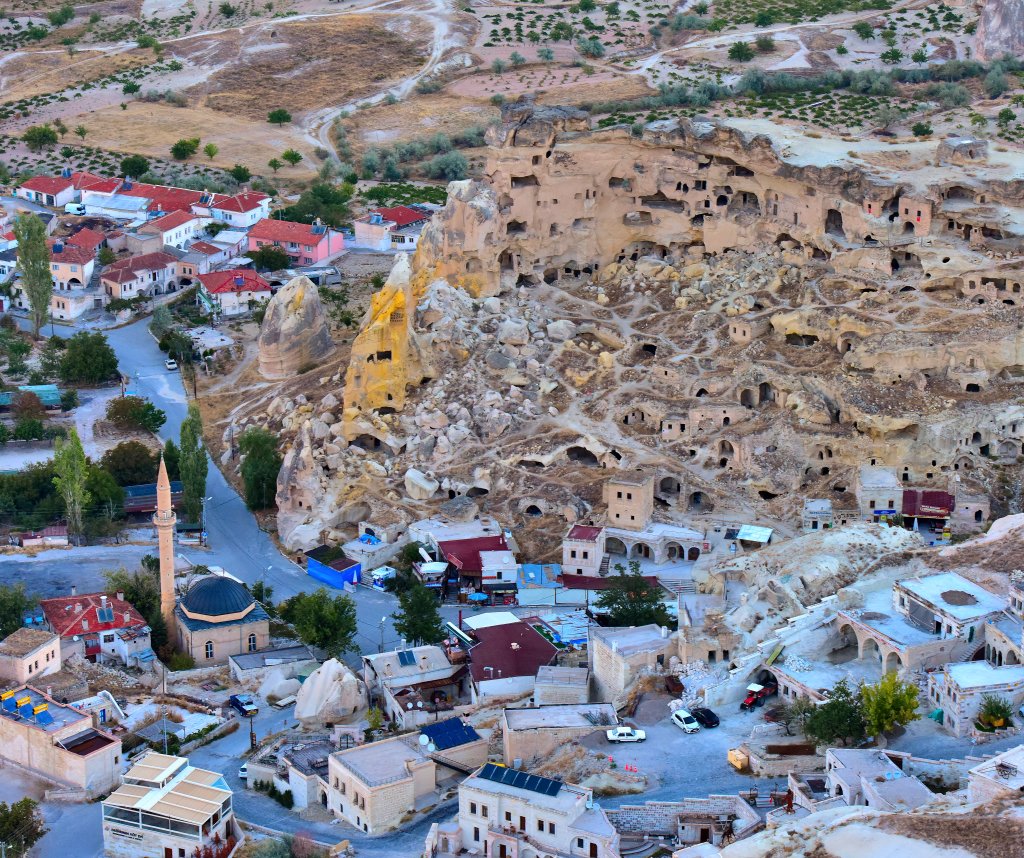 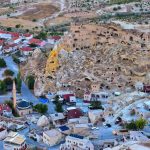 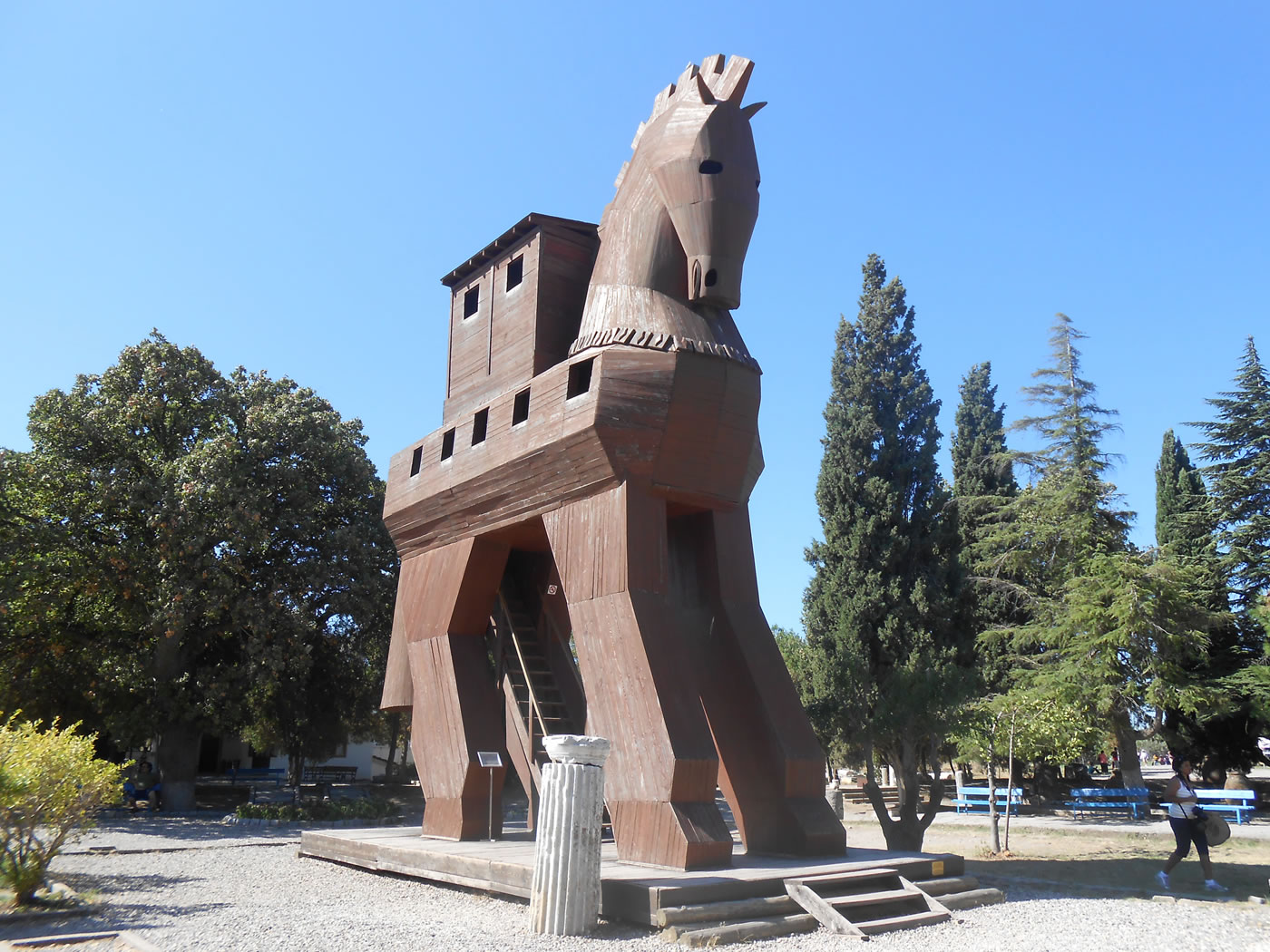 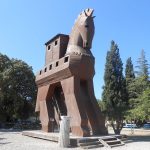 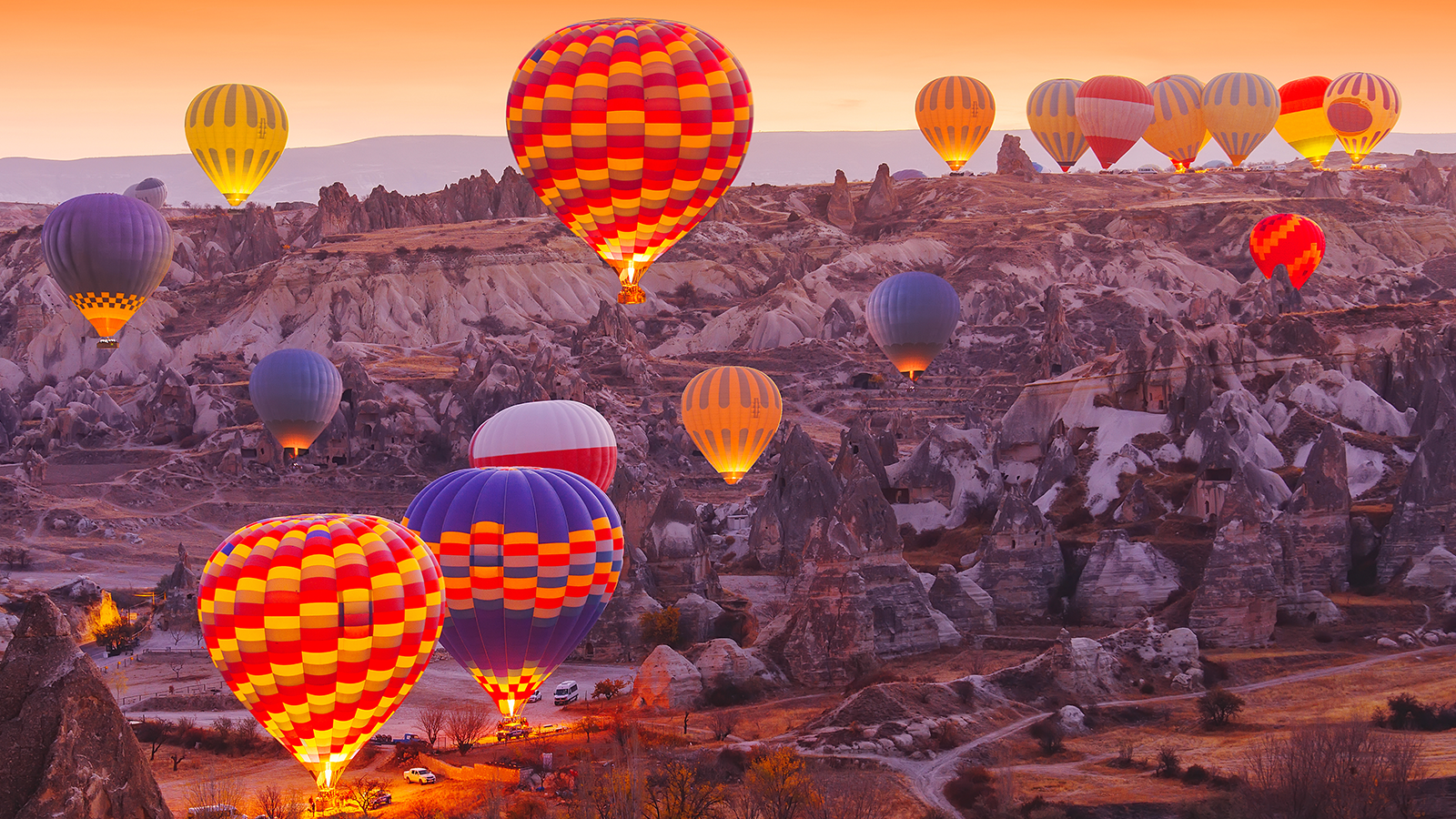 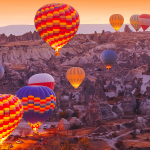 (This is a private tour and the departure date can be any day.)

*** This 12-day tour begins in Istanbul and visits the highlights of Istanbul, Drive to Gallipoli, Troy, Pergamon, Ephesus, Pamukkale and Cappadocia.You see all the highlights of Turkey in 11 days. Please note that we can skip or add more days below depends on your interest, time and budget.

Upon arrival at The Istanbul International Airport, you will be met and transferred to your hotel in Sultanahmet. There is no schedule on your programme today. Have a rest. Overnight in Istanbul.

Your guide will meet you after breakfast for Old town tour of Istanbul. A short walk takes you to;

Hagia Sophia: The Church of Holy Wisdom was the largest church in the Christian world for a thousand years undoubtedly one of the greatest architectural creations in the world, was used as a mosque during Ottomans and now serves as a museum.

Byzantine Hippodrome: The center for entertainment, amusement and sports in the city during the Roman and Byzantine Empires. The Egyptian Obelisk, the serpentine column and the German fountain of Willhelm II are sites to be visited.

Blue Mosque: The Sultan Ahmed Mosque is the most famous monument in both the Turkish and the Islamic worlds,is famous with its blue ceramic tiles and six minarets.

Topkapi Palace: Topkapi Palace is certainly the most important historical site to be visited in Istanbul. It is one of the most frequently visited museums of Europe and is the most visited one in Turkey. The former imperial residence of Ottoman Sultans and the oldest and the largest remaining palaces in the world. Today, it is used as a museum to exhibit works of art and many priceless artifacts. The harem section is extra fee to visit. Overnight in Istanbul.

Our second day in you will see The most amazing and unforgettable attraction in Istanbul is  Boshporus cruise tour.

Your guide will meet you at the hotel and  start your tour.

Escape the city traffic and set sail on this 90 minutes boat ride that shows you the amazing sites of Boshporus. You will see the most beautifull atractions of Istanbul such as Topkapı Palace, Golden Horn, Ortakoy Mosque, Galata Tower and Maiden’s Tower(Kız Kulesi). You will take photo while passing under the Legendary Boshporus Bridge that connects Europe and Asia.

After Boat Ride you will experience one of the famous market called Spice Market (Mısır Carsısı) full of fantastic displays and tasty treats such as spices, dried fruits, nuts, seeds… Overnight in Istanbul.

In the early morning, pick up by the driver around 06:30-07:00 am and depart to Gallipoli. Arrival to Gallipoli after driving 5 hours and then we will visit to The peninsula of Gallipoli (Gelibolu in Turkish) is a unique site in the European part of Turkey.  Thousands of visitors attend the ANZAC Day service each April and tens of thousands arrive throughout the year to commemorate the famous battles of The Great War.The name Gallipoli is taken from the Greek word Kallipolis, meaning “beautiful city”. Settled by Ottoman Turks in the mid 1400s, the Gallipoli peninsula became a staging area for Ottoman expansion into the Balkans. Today the area is mostly remembered for the battles that took place between British and French troops of the Allies against Ottoman troops between April 1915 and January 1916. Most famously, it was where the soldiers of the first ANZAC – the Australian and New Zealand Army Corps – went first into action during the Great War.

After having breakfast at the hotel, we will visit the ruins of legendary Homer’s Troy with its famous Trojan wooden horse, best known for being the setting of the Trojan War and many cities built on top of each other. After we drive to Pergamon for visiting the Acrapol with the library, the hillside theater, Royal Palaces, the Altar of Zeus, and the propylaeum of the Temple of Athena. In the early Christian era, Pergamum’s church was a major center of Christianity and was one of the Seven Churches of Revelation. Pergamon has  the Ancient hospital(health center).

Pegramon’s excavations were completed in 1886. Pergamon’s foremost attraction is the “Red Basilica”, a huge edifice on the river not far from the Acropolis, originally built as a temple to the Egyptian god Osiris and converted to a basilica by the early Christians, when it was one of the Seven Churches of Asia Minor addressed by St John in the book of Revelation.

At the end of the tour we will drive 2 hours to Kusadasi to stay there overnight.

You will be welcomed by your tour guide at the hotel reseption at 9.00 a.m.

After comfortable  drive you will arrive to House of the Virgin Mary which is located in Selcuk town very close to Ephesus ancient city. This is believed to be the last house of the Virgin Mary, Mother of Jesus. The three Popes visited here as, Paul 6th in 1967, John 2nd in 1979 and finally Benedict 16th 2006.  This House was later visited by Popes Paul VI and John Paul II, who confirmed its appropriateness as a place of pilgrimage. On November 29, 2006, Pope Benedict XVI celebrated mass here.

Following you will visit Ephesus Ancient City. You will walk about 1.5 km distance. Your Ephesus tour will start at the upper gate and finish at the lower gate of Ancient Ephesus City.  You will have an extensive tour in this ancient site where you will see  Domitian’s, Trajan’s and Hadrian’s Temples, the huge Roman bath, Harbour Street, Marble Street, the Gates of Mihridates and Mazues, Commercial Agora, Latrina, the Scolastica Baths, Curetes Street, Polio Fountain, Memnius’ Monument, the Prytaneion, Odeon, the State Agora, the Celsus Library and the biggest amphitheater in Turkey.

You will try one of the local restaurants and may stop by some local shops acording to your interests and time.

Finally you will visit the ruins of the Temple of Artemis (Artemision), which was one of the Seven Wonders of the World and driving back to Kusadasi hotel,. Overnight in Kusadasi.

We drive to Pamukkale village which takes about 3 hours driving by a private,A/C, luxurious vehicle  to see Pamukkale  one of the most important natural beauty in Turkey. Pamukkale means cotton castle and the name of Pamukkale comes from white calcium terraces. Pamukkale is very important for the tourists because of the its historical sites of Hierapolis Ancient city, Calcium Terraces and Mineral Water Spring Pool also called Cleopatra Pool.

After driving,you will start walking in the city Hierapolis which was founded on this site in the 2nd century B.C., “Hierapolis” means “sacred city”, and according to Stephanus of Byzantium the city was given this name because of the large number of temples it contained. Today, the theatre, the Apollo temple and the necropolis are the most important places to see in Hierapolis.

You can get in the little White pools and take best pictures in Pamukkale while walking through the travertine without shoes, slippers and socks.

Your guide will give you some free time for swimming in Cleopatra pool which is optional and extra, and you need to have swimming suit in here.

Drive back to hotel and Overnight in Kusadasi.

Enjoy the breakfast and has a rest morning. After transfer to Izmir Airport for the  flight to Cappadocia, then we take an hour’s transfer to our hotel. Overnight in Cappadocia.

Early Balloon Tour(optional-extra)Standard balloon flights offer the minimum of one hour’s flight time. You are picked up from your hotel early in the morning, before sunrise, and driven to the take-off site. After you have had a light breakfast, you can also see the inflation of the balloon and you get a brief instruction about the basic rules of balloon flights. After that you smoothly take off in your balloon. Having glided over the beautiful valleys of Cappadocia and taken hundreds of pictures, you land and celebrate your flight with champagne. After getting your flight certificates you are taken back to your hotel by 08:30 am, having still a full day for other activities ahead of you.

Starting from your hotel at 9:30, you will be greeted by your guide and the driver. The first stop is Devrent Valley.which has many animal-shaped rocks. Most commonly seen shapes are a camel, snake, seals, and a dolphin. If you use your imagination, you can find many others.

Then you go to the village Cavusin. The old part of the village was abandoned in the 1950s due to rock-falls caused by erosion.

Avanos,Famous for its pottery since Hittite times, more than 4000 years ago, we will see a kick-wheel pottery demonstration.

Goreme Open Air Museum is the highlight of Cappadocia.Your guide will explain the meanings of frescoes covering the walls of thousand-year-old cave churches as you explore this spectacular UNESCO World Heritage site.

We take you back to your hotel. Overnight in Cappadocia.

Starting from your hotel at 9:30,  The first stop is at the famous Tree beauties of Urgup, where you can see the mushroom-shaped rock formations and a panorama of the city of Ürgüp

After you will see the highest castle in Uchisar village which is called  Uchisar Castle. Uchisar is the biggest rock-cut castle in the region, built during the Byzantine Empire.

We will continue to visit underground city. Your guide will explain how locals carved these multi-level underground cities and You can  see traces of their daily lives in the stables, wineries, temples, etc. Right after the underground city,

You might have a nice and easy valley walking depends on your time and interest.

After breakfast,Transfer to Cappadocia Airport to board the flight to Istanbul. Free day in Istanbul. Overnight in Istanbul.

Transfer to Istanbul Airport with your driver to fly back Home. In Turkish we say to our Forever travel friend  ‘GULE GULE’ ‘GO WITH A SMILE’